The application window for the latest round of funding is now closed.

While Black, Asian and minority ethnic consent rates for donation after death have been slowly increasing over the last decade, research shows that families from these communities are far less likely to support donation going ahead than White families. There are a range of reasons for this, and this piece of research by Agroni outlines some barriers and motivations for key groups. 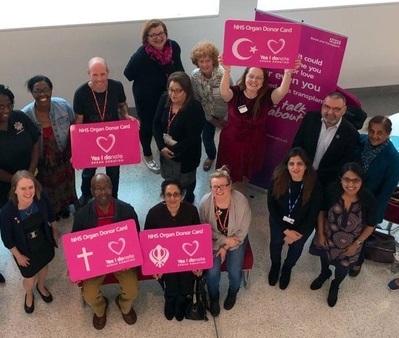 The lower levels of support and the shortage of organ donors from these communities matter because people from Black and Asian communities are more likely to develop high blood pressure, diabetes and certain forms of hepatitis than White people. These conditions make them more likely to need a transplant.

33% of patients waiting for a kidney are from Black, Asian and minority ethnic communities.

Although many Black, Asian and minority ethnic patients are able to receive a transplant from a White donor, for many the best match will come from a donor from the same ethnic background.

Unfortunately, donation rates from these communities are a lot lower than for White people. This means that Black, Asian and minority ethnic patients often wait longer for a transplant.

By increasing the number of deceased organ donors from these communities each year, we will reduce the waiting time gap and save and improve the lives of more patients from Black, Asian and minority ethnic communities.

We know that the proportion of people from Black, Asian and minority ethnic communities who have registered a decision to donate is lower than for White people across the UK.

Also, of those who have told us they are from a Black, Asian, mixed heritage or minority ethnic background, the vast majority have recorded an opt out decision. Much of this ‘opt out’ registration activity has been in response to incorrect information circulating on platforms like WhatsApp.

While it is everybody’s choice whether or not they want to donate, we want to ensure that people base their donation decision on the facts. We also want people to discuss their decision with those closest to them so their loved ones know what they want to happen.

Any community organisation focused on engaging Black, Asian, mixed heritage or minority ethnic communities can apply for funding to deliver a project around organ donation.

Our insights show us that further engagement is vital in the following groups (click on each group to find out more).

Clinical need for organ transplants is higher across South Asian communities than in the White community because people are more likely to live with conditions that make them likely to need a transplant, like diabetes and hypertension.

People from these communities are less likely to donate their organs, and the reasons for this vary widely across different communities. The net effect of this is that a South Asian patient will wait on average 5 months longer for an organ than a white patient.

The Indian community is the single largest ethnic minority population in England and Wales, and therefore a significant audience to engage further on organ donation.

We know from our data that people from Pakistani and Bangladeshi communities are more likely to opt out than those from other ethnic groups. We also know that faith and beliefs often play an important role in forming perceptions about organ donation in these communities.

There can be a perception that organ donation is not permitted in the Muslim faith, followed by a large proportion of this community. NHSBT has numerous resources to support projects to challenge these ideas and engage the community positively in organ donation.

One of the challenges is the misinformation circulating throughout these communities via WhatsApp. We are looking for organisations we can work with to build trust and share the facts about organ donation, so everyone can make an informed choice.

We know that Black people are more likely to need an organ than any other ethnic group, and that people from this community tend to wait longer for an organ than Asian and White people. This is due to a shortage of organ donors from Black backgrounds.

People from Black communities are also more affected by wider health inequalities than any other ethnic group in England, an issue which can manifest in a distrust of the NHS.

In recent months this has been compounded by misinformation about the law change. We are looking for organisations we can work with to build trust and raise awareness of the acute need in the community.

We are particularly interested in funding projects that engage young people from Black, Asian, mixed heritage and minority ethnic communities, between the ages of 16-24. There are a number of reasons for this:

Any applications focused on engaging the Muslim community must demonstrate:

Since 2013, NHS Blood and Transplant has been engaging with Islamic scholars, imams, chaplains and umbrella organisations through its Transplantation in Islam project.

A fatwa (religious edict) was published in June 2019 by Mufti Mohammed Zubair Butt, adding to the dialogue and discussion around organ donation and Islam and support from the Muslim community is needed to help disseminate this fatwa and to hold discussions within their community.

Find out more about organ donation and Islam

If a project focuses on the Hindu and Jain communities, you can obtain support from the Jain and Hindu Organ Donation (JHOD) Steering Group (PDF 80KB).

What is living kidney donation?

Living kidney donation is when a person gives one of their healthy kidneys to someone with kidney failure who needs a transplant (the recipient). This could be a friend or family member, or someone they do not already know.

The average waiting time for a kidney transplant from someone who has died is approximately three years. For some ethnic groups and people with rare tissue types, the wait can often be five years or much longer.

Why we are including living kidney donation in this programme

As set out in latest organ and tissue donation and transplantation strategy by NHS Blood and Transplant (NHSBT), living donation will become an expected part of care, where clinically appropriate for all in society.

Our Transplant Activity Report waiting list data shows that in particular, Black and Asian adults wait longer for a kidney transplant, on average around 10 and 5 months (respectively) longer than the White population.

Despite Black and Asian people representing about 10% of the UK population, they are highly over-represented on the transplant waiting list (26%).

Living donation sees a higher percentage of matching for these patients and is therefore critically important in reducing the inequity in waiting time.

Coupled with this, major research into kidney patients found strong evidence that people with reduced or low health literacy and/or capability barriers have reduced access to transplantation. We hope that projects invested in health literacy will develop new ways of addressing this.

Use this interactive map to find your nearest living donation transplant centre.

Each project involved in NHSBT’s Living Kidney Transplant Community Investment Scheme is connected with their nearest transplant centre meaning that they can work closely together to improve chances of the projects success and ultimately save and improve lives.

The application window for the latest round of funding is now closed.

We hope to notify applicants of funding decisions in February 2023. However, if we are awaiting answers to clarification questions from projects, some decisions may be delayed.

If you have any further questions about the programme or previous projects we have funded, please contact community.funding@nhsbt.nhs.uk and we will respond as soon as we can.

About the Community Grants Programme and why it's needed.

Learn more about the focus of projects promoting blood and stem cell donation.