This blog, by Dr Nick Watkins (Assistant Director – Research and Development, NHSBT) is the first of a series that will highlight some of the exciting research, development and innovation projects which our scientists are leading. 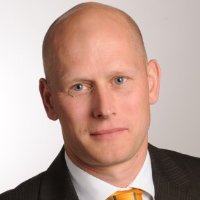 The one phrase I recall from a conversation with my Grandfather just after he was diagnosed with prostate cancer was “It’s not a death sentence.” This took me by surprise initially, but as we spoke further it brought home to me the unprecedented advances in the understanding, diagnosis and treatment of cancer which he had seen through his lifetime.

When he was growing up a diagnosis of cancer was almost inevitably accompanied by a poor short-term outcome. The situation today is very different: survival data from Cancer Research UK shows that cancer survival has more than doubled in the past 40 years, with 50% of patients surviving for 10 or more years1.

Challenges remain (survival rates vary from 1% – 98% depending on cancer type), but living through these changes I could begin to understand his attitude to his diagnosis.

How our views on health and disease differ from those of our grandchildren will depend upon scientific advances over the next few decades.

Predicting the impact of current innovations and trends on how future generations will interact with and benefit from our services is challenging. Niels Bohr, the Nobel prize winning physicist, was right when he said “Prediction is very difficult, especially if it is about the future”. Technologies that are likely to have a significant impact over the next generation include cell and gene therapies, data science and genomics.

The timeframes in which these will impact upon NHSBT will vary, as will their costs, but there are already examples of how they are transforming patient diagnosis and treatment.

I have a strong intuition as I read about the innovative science which we and others are carrying out that in the future multi-transfused sickle cell patients will be able to choose between a gene therapy which “cures” their disease, treatment through transfusion of donated blood or treatment with laboratory grown red cells. In the same timeframe, transplant recipients may receive advanced cell therapies with their organs that reduce the chances of immune rejection.

Our scientists in Bristol and Cambridge are using gene editing techniques to modify blood cells which they are growing in the laboratory. These modifications allow us to produce red blood cells with specific blood groups or platelets which lack human leucocyte antigens (HLA), novel cell therapies that may provide better transfusion products for hard to match patients.

The same scientists developing these new types of blood product are also hard at work on a clinical trial which will test whether laboratory grown red blood cells survive longer than donated blood cells. We hope to recruit our first volunteers to this study in September of this year.

Alongside gene therapies, new cellular therapies have been developed which are able to either replace defective cells or target cancer cells. So-called Chimeric Antigen Receptor T-cells (CAR-T cells) can retarget the body’s defence systems to attack and destroy cancer cells. These therapies, which are being manufactured in our Cellular and Molecular Therapies laboratories, offer some cancer patients treatments where all others have failed.

The Component Development Laboratory (CDL), led by Dr Rebecca Cardigan, together with the Manufacturing Development Team (MDT) are working on projects that will improve the provision of traditional blood components to hospitals. They are developing new components which combine red cells, platelets and plasma which may offer more effective treatment for patients who suffer massive blood loss through trauma.

Ever wondered whether we can extend the shelf-life of red blood cells? CDL and MDT are trialling new preservative solutions which have been designed to increase the function of stored red blood cells thereby extending their storage time.

Most of the science leading to these innovations involves scientists working in laboratories – picture the typical image of white coats, test tubes, microscopes and pipettes. We have, however, seen the make-up of a research lab change considerably over the past 20 years as the analysis of complex data sets has increased in importance to the scientific discovery process.

More and more, data science is becoming a critical part of how we innovate. This new approach involves bioinformaticians and data scientists using state of the art high-performance computers to gain previously unseen insights.

Working with academic and commercial partners we have started to analyse NHSBT data using advanced algorithms. The outcome of these studies is providing insights into donor behaviour, blood use and transplant list waiting times.

Operationally, linking data on when blood is issued to donor mobile numbers and the introduction of a simple texting system is transforming the way we interact with donors. Anyone following the @GiveBloodNHS Twitter feed will see how much the donors love to receive these texts.

Second image: a tweet from a Twitter user reads: "@nhsbt what a brilliant 1st for me. Never received a text like this before. #humble - it's easy to donate - ring them!" 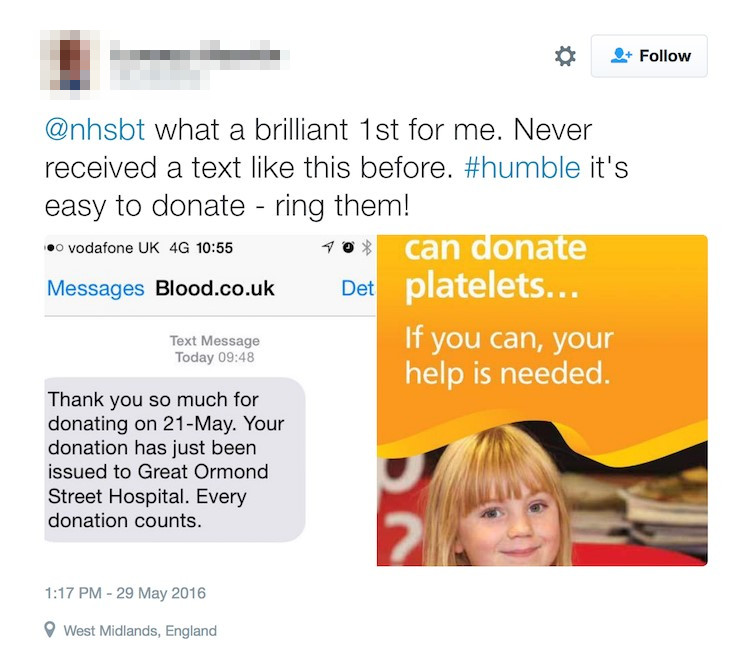 Recently published data from Australia show that sending text messages to blood donors telling them which hospital or town their blood has been dispatched to increases the likelihood of a donor returning to donate within 12 months by almost 17%2.

In genomics, we were the first organisation to deploy next generation DNA sequencing to type bone marrow donors. This approach, developed in our Histocompatibility & Immunogenetics laboratories, provides unrivalled resolution of a donors’ HLA-type, information which increases the likelihood of our donors being selected to treat patients requiring a stem cell transplant.

We are also working with commercial organisations to develop the next generation of donor and patient genotyping platforms. These will enable us to characterise donors as never before, providing comprehensive information on blood groups and increasing our ability to supply matched blood to patients.

On 19th December last year, the U.S. Food and Drug Administrator approved a gene therapy called Luxturna that can be used to treat a rare form of blindness. This marked the first approval of a gene therapy for an inherited disorder, (disease passed from parent to child through their genes).

The drug, which consists of a virus containing a correct copy of a gene that is critical for normal vision, is given only once and can restore sight in these patients. What price would you put on your sight? The company who have developed this treatment have agreed a price of $870,000 in the U.S., with a rebate based on patient outcomes.

The price was somewhat lower than that expected by analysts who had predicted a price of $1M. The race is on to develop gene therapies for other inherited disorders such as haemophilia, thalassemia and sickle cell disease.

The creation and application of knowledge will continue to drive changes through the generations as we increase our understanding of health and disease, with treatment options available to our children and grandchildren being inconceivable to us today.

Our research, development and innovation programme spans across the organisation, with advances in Transfusion and Transplantation building on those in other clinical fields. We cannot predict the future, but, as Alan Kay, a pioneering American Computer Scientist, said “The best way to predict the future is to invent it.”

Register to give blood

Save a life. Give blood.