Even following 120 years of important discoveries that changed the face of transfusion medicine, the mysteries of some blood groups are still to be resolved.

In our latest research, scientists from the International Blood Group Reference Laboratory (IBGRL) and the NIHR Blood and Transplant Research Unit (NIHR BTRU) in Bristol led an international collaboration to investigate MAM, a clinically important blood group. As a result, we have succeeded in identifying a completely new and exciting novel blood group system leading to a publication in Nature Communications (DOI: 10.1038/s41467-020-17060-4).

‘MAM’ is a blood group antigen carried on the red cells of nearly all humans. Only a few very rare individuals lack the MAM antigen - only 11 confirmed MAM-negative individuals are known around the world. Patients who are MAM-negative can make antibodies against MAM when transfused or pregnant.

Using samples from 10 of the known MAM-negative individuals and cutting-edge techniques the mystery of the MAM blood group has been revealed. The study involved an International team of 24 scientists and clinicians from 10 of the world’s leading transfusion medicine institutions.

Initially at IBGRL, we investigated the genetic basis of MAM by using a powerful DNA sequencing method which decodes all genes simultaneously in one experiment, see Figure 1. Using samples from the MAM-negative individuals and comparing these with results from MAM-positive individuals, enabled identification of EMP3 as the gene responsible for the expression of MAM. We found that the 10 known MAM-negative individuals all had changes in the sequence of the EMP3 gene which would stop the production of the protein in red blood cells. EMP3 or epithelial membrane protein 3 has been studied in cancer cells but was not previously described in the red cells.

Proving a mystery requires a lot of evidence and, in the world of blood groups, it was essential to confirm that the EMP3 gene does in fact encode the MAM blood group antigen. To confirm this, we opted for two different approaches which involve the use of genetic engineering to demonstrate that the expression of the EMP3 gene is essential for the cells to be MAM-positive. The results obtained in Bristol were corroborated, using a third approach, by our colleagues in Lund, Sweden. By using multiple approaches we unequivocally confirmed that we had solved the mystery of the MAM blood group.

As with many scientific discoveries, identifying EMP3 as the gene encoding the MAM blood group was only the first layer of discovery.

By exploring the properties of EMP3 further, we discovered that the protein stabilises another very important red cell protein - the cell surface signalling molecule CD44. Experiments have also shown that red cells cultured in the laboratory from MAM-negative individuals have a much higher yield than those from MAM-positive individuals. These results suggest an important regulatory role for EMP3 and CD44 in red cell production, which in turn may provide a mechanism for increasing the yield of cultured red cells. See Figure 2. 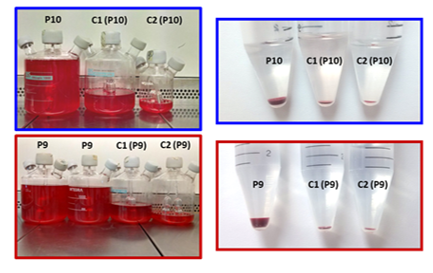 As cell cultures were adjusted to maintain equal cell densities, noticeably different final volumes were obtained at the end of the culture, which can be seen by the different sized spinner flasks. The comparison of packed red cell pellets of filtered young red cells, can be seen in the test tube pictures, and reflect the greater cell multiplication capabilities observed in the MAM-negative cultures (P9 and P10) compared to the controls (C1 and C2).

This work could not have been carried out without the support of the incredibly enthusiastic and cooperative MAM-negative individuals who donated their blood.
It has taken over seven years to complete this research which means it is now possible to quickly identify MAM-negative individuals. As with many blood groups, studying their genetics and function has far-reaching consequences far beyond the need to understand transfusion requirements.

There is plenty more to investigate of the roles of MAM, EMP3 and CD44, as well as amongst other, yet uncharacterised, blood group antigens. IBGRL and the NIHR BTRU continue to pursue the global quest with our international partners.

Visit the blood donation website and register to donate today