Dr Jose A Guerrero is an NHS Blood and Transplant Research Associate based at University of Cambridge in the Platelet Biology Group. Here he talks about some of his work. 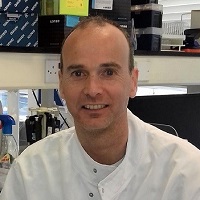 Whenever we suffer a cut, our damaged blood vessels need to be repaired to limit blood loss. This job is done by blood platelets, nature’s sticking plasters, which rapidly make a clot and repair the wound.

However, platelets have a dark side and when a fatty plaque in a blood vessel ruptures a clot can develop preventing blood circulation to the heart or the brain, causing a heart attack and stroke. These two diseases combined are the Number 1 Killer in the UK.

Platelets are the smallest type of cells that circulate in blood and contain tiny storage vesicles named granules. The granules, of which there are 3 types, are essential for platelets to function properly.

The most abundant granules contain hundreds of ‘sticky’ molecules (or proteins). When a blood vessel is damaged, platelets attach to the site of injury to swelling up in size and releasing the cargo of sticky proteins that work like Velcro to quickly stop bleeding.

Our understanding of how platelets work has been built up over many years and has involved the study of platelets from patients whose blood does not clot properly. In the early 1970’s, a boy who bruised easily and suffered excessive bleeding had his blood analysed.

Surprisingly, when looking with a microscope at a drop of the boy’s blood, the doctor observed that the platelets looked grey instead of the usual purple. The greyish platelets were also larger than platelets from healthy people. The doctor termed the condition Grey Platelet Syndrome.

Further studies showed that the platelets appeared grey because they lacked the most abundant type of granules. Scientists also discovered that Grey Platelet Syndrome was inherited, passing from parent to child through the generations.

The gene causing Grey Platelet Syndrome remained elusive for 4 decades and reaching a conclusive diagnosis for this rare disorder was therefore not possible.

In 2011 a team of researchers, led by Professor Willem Ouwehand at NHS Blood and Transplant in Cambridge discovered that mutations in a gene named NBEAL2 were the cause of Grey Platelet Syndrome. Genes contain the information to make up molecules (proteins), which are essential for the proper functioning of cells, tissues and organs of our body.

Studies showed that both copies of the NBEAL2 gene, which had been passed on from mum and dad to the young boy were altered and, as a consequence, his platelets did not contain the NBEAL2 protein.

Despite knowing which gene caused Grey Platelet Syndrome little was known about how mutations in NBEAL2 caused the loss of granules in platelets. But now, after years of work in the research laboratory, my team have discovered some new and important information about what NBEAL2 does.

We have discovered what NBEAL2 does to control these abundant granules in platelets and why mutations in it cause Grey Platelet Syndrome.

Like many things, NBEAL2 belongs to a family, in this case a family with 9 members called the BEACH family because all its members contain a unique region in their structure known as the BEACH domain. BEACH stands for BEige And CHediak-Higashi and we think BEACH domains are essential to how BEACH proteins such as NBEAL2 interact or talk to other proteins in cells.

Prior to work carried out by my team we did not know which other proteins NBEAL2 “talks” to in platelets. By carrying out a ‘fishing expedition’ using the BEACH domain of NBEAL2 as a hook we “fished” for proteins in platelets which interact with NBEAL2.

The fishing expedition was highly successful and we caught 132 different proteins, all of which are thought to interact with NBEAL2. One of these, called DOCK7, was shown to interact with NBEAL2 in such a critical way that this interaction is key for platelets to respond to injury. It also became clear that platelets from patients with Grey Platelet Syndrome lack the DOCK7 protein, which explains why their platelets are too large. 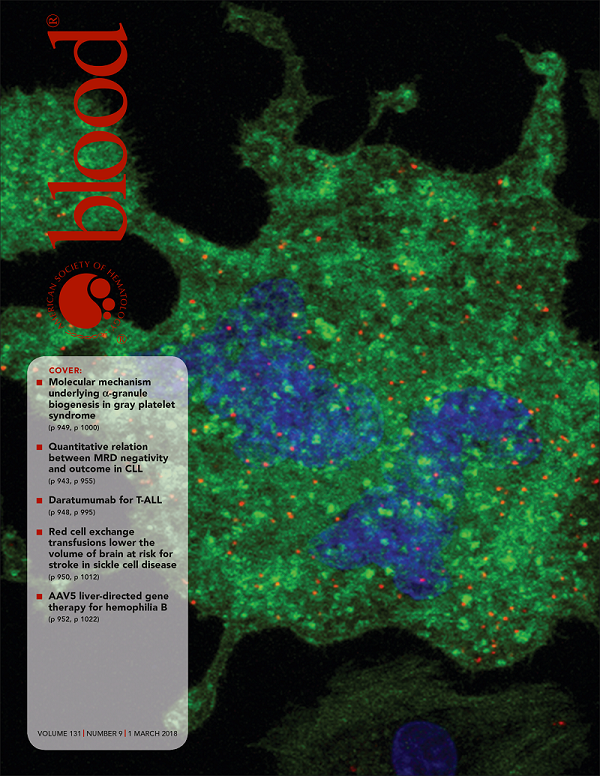 I hope you have been enjoying reading the story about this rare condition Grey Platelet Syndrome. If you would like to know more about the science behind this discovery please check out the scientific publication which describes our experiments in Blood, the official journal of the American Society of Hematology, whose front cover in this week’s issue shows an image of our study.

Investigating the reasons behind inherited diseases such as Grey Platelet Syndrome allow our scientists to save and improve patient lives.

First image: One of the images of Dr Guerrero's team's study on the Grey Platelet Syndrome illustrates the cover of this week’s issue of the Blood journal.

We provide concentrates of platelets to almost one thousand NHS patients every day. Providing this life-saving product to the NHS requires us to understand how to make the best platelet concentrates.

It is also hoped that the new insights we obtained by studying patients with Grey Platelet Syndrome may one day lead to the development of better and safer drugs to prevent thrombotic strokes. 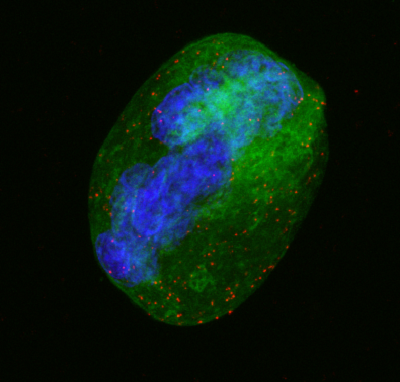 My analysis of Grey Platelet Syndrome has shown us more about how platelets work in our body like a new chapter in a book that is yet to be finished.

Second image: The mother cells of blood platelets are called megakaryocytes, a type of cells that reside in the bone marrow, the spongy part inside our bones. In this image, a megakaryocyte is seen in green while its nucleus, containing the DNA, is in blue. The orange dots represent the interaction between NBEAL2 and DOCK7 which allows platelets to carry out their clotting job.

Find out where you can donate and register your interest here